Capture More Consumers with NFC Technology in Your Vending Machines 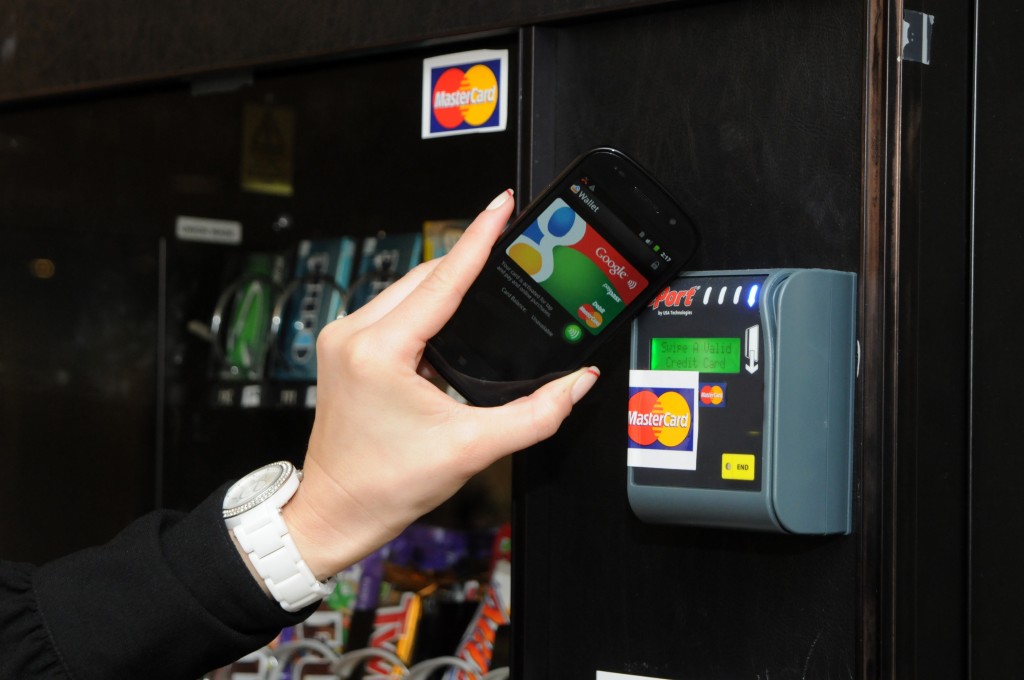 How Can NFC Help You?

In our blog, we have discussed several topics about innovative technology in vending like Parlevel Systems’ VMS. However, a lot of the things we have discussed are already available or used for promotional purposes. There is a new technology on the horizon that will change the way we purchase items from retail stores, convenience stores, and, perhaps, vending machines. This technology is called near-field communication, or NFC.

NFC is a technology developed by Nokia, Philips, and Sony starting in the early 2000s. It came from the idea behind RFID, or radio frequency identification, which allowed a reader to send radio waves as an electronic tag to identify, track, or authenticate something. The way NFC works is if two NFC chips are in close contact with each other, information is allowed to pass through. That information could be a URL for a website, a photo, contact information, or even payment information. In our workplace, for example, we use small tags with NFC chips inside to access the upper floors of our building. It’s a very convenient and useful technology, and it cannot be activated without the user’s permission, adding in extra security.

NFC as a Growing Technology

One thing that had puzzled me, though was why NFC has not taken off in the United States like it has in European countries and Japan. In those countries, people use their smartphones with NFC chips built in to make purchases, access public transportation, and easily send information to one another. When I lived in China, I used a card with an NFC chip built in to access taxis, buses, and the subway. In the US, there are a lot of smartphones that carry this technology in them, but NFC is not widely used, and the ability to make purchases or access public transportation with smartphones  is not widely available. There are some companies that have begun to roll out NFC kiosks, and until recently NFC had been absent from smartphones.

The reason for the lack of NFC use in the United States is a lot like the “chicken or the egg” conundrum. Not everyone in the US has an NFC enabled smartphone, even though the list of smartphones using NFC is large, but smartphone adoption in the US has grown to over 50% of all adults, and it will continue to grow in the future, making it easier for retailers and public service providers to use NFC for mobile cashless payments. Services like iPhone’s Apple Pay software or Google Wallet are driving the US toward NFC payment. In New York, for example, people can use NFC chips to pay for their taxis, so the hardware is available, and there are people willing to use NFC. The real issue is that there is not enough software to work with NFC chips.

However, this might change in the near future. There are services such as Google Wallet and Apple Pay. These options work with any NFC enabled kiosks, so one does not have to download specific software to work in certain places.

Important Implications for NFC in the Vending Industry

As for the vending industry, this technology would work in a similar way to credit card readers and be an addition to a cashless solution. Having an NFC chip in a vending machine, for example, will allow customers to view the nutritional information of the items in the vending machine on their smartphone, complying with the federal mandate. Customers can make their choices on the smartphone and then wave the smartphone across the NFC-enabled kiosk on the machine for it to vend their products. Any promotions, coupons, or loyalty cards can be stored in the smartphone and be utilized at any time. This acts as an incentive for customers to come back to the machines, increasing sales and profits.

However, there is an issue with cost. From my research, purchasing an NFC tag is roughly less than $5, but if a vendor were to purchase them by his or herself, it would require the vendor to understand how to encode the NFC chip and comply with security standards for receiving payment information. Technology providers, however, have not yet come up with a solution for NFC because of its lack of availability in the USA. MasterCard with their PayPass is available along with a card reader, and I have seen some on vending machines in very busy areas. However, I do not have the information as to how often that payment option is used. If there are any other updates to NFC and the vending industry, you can find them here on this blog.

For now, this blog will act as a means to explain what NFC is to vendors and how it can possibly be used for customers to learn more about their product purchases before buying their snacks and drinks. It is a very exciting technology, and we look forward to seeing Isis Mobile Wallet roll out all over the US. The convenience and security that this technology will bring will revolutionize the way we make our purchases in the future. Stay tuned with the Parlevel Systems vending resources to learn more about what the future of vending has in store.